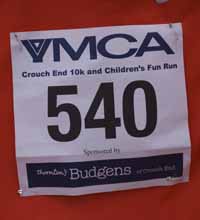 We were sent details of this event and race by a friend and his family so I signed up for the 10k, The Son for his age group 1 mile run, and Mrs Dan to look after The Son while I was running and also to generally walk around the festival. The Son was looking forward to his race in the weeks leading up to the event and he came with me to the park several times to train with me.

We arrived nice and early to make sure that we secured a parking space near the park since we knew that there was no on-site parking. There were plenty of runners making their way into the park so, after getting changed into my kit, we followed the crowds through the park onto the staging area where most of the stalls were setting up and getting ready for the day. After finding our friends it was soon time for the aerobic warm-up that was let by a very energetic lady standing on the stage area and The Son joined in with me near the front with great enthusiasm.

I didn’t throw myself into the warm-up too much but I enjoyed it and made sure that I was ready for the race. All the 10k runners were called over to the start area, where I found myself quite far back once again, and the race was soon under-way. The start wound through the park and was quite narrow so I had to slow myself down as there was little chance to pass through the crowds but as the route left the park onto the open roads there was plenty of room to hit my preferred pace due to the roads being closed off to traffic.

With runners now streaming down roads, along some footpaths, and on some pavements where traffic was still allowed to run, the field soon spread out and I was on my just below 5 mins per kilometre pace. The route included a second loop of part of the course and on the first pass I skipped taking a drink and unfortunately on the second pass of the drink station the person holding out the sponge I was aiming for moved slightly and I missed out. The lady was very apologetic as I passed but thankfully it was not a hot day and I did not really need a drink. The final stretch led downhill back to the park and I picked up for a near sprint through the park and onto the finish line where The Son and Mrs Dan were ready to cheer me through with a preliminary gun time on the overhead counter of 50 minutes 6 seconds.

I made my way through the finish area to grab a bottle of water but steering clear of the free doughnut stall and had a look around the festival area while waiting for the kids races to start. Eventually it was time for the kids races to start so we stood near the start line to watch the start and finish of the younger kids so that The Son could see how things worked. We were quickly surprised to see just how competitive some of these races were and as the age groups got higher, the start area became more and more crowded with quite a few kids falling due to clipped heels as the mass of runners increased.

The Son was due up next for his category and given some of the mayhem and tears from a few kids accidentally tripping in previous races, we urged him to get as close to the start as possible just to make sure he didn’t suffer a fall. This turned out to be a good idea as there were close to two hundred kids and they all sprinted off at the start and we did see a couple of kids trip and fall due to some accidental heel clipping. We stayed near the start / finish line and waited for The Son to come sprinting around the final bend so that we could cheer him on. The Son was soon sprinting down the home straight and we made sure to give him as much encouragement as possible. All the finishers were presented with a medal, which he was very proud of, and all had the option to take a free doughnut as provided by a local bakery.

We all had a great day out and wish to pass on our thanks to all involved in the organisation of the Crouch End 10k and Children’s Fun Run 2011. We will definitely be back in 2012, good health permitting, and will be recommending the event to our friends.